The revenues in 2018 increased by 5.3% y/y ie. PLN 14 534 thousand from PLN 273 767 thousand to PLN 288 301thousand. In the I half of 2018 XTB noted a record revenues (PLN 197 937 thousand), which resulted from the constantly growing customer base, clear trends in the financial markets, relatively high profitability per lot (an average of PLN 153) and significant customer activity expressed in the number of contracts in lots ( 1 291 426 lots). II half of 2018 brought reduction of revenues to the level of PLN 90 364 thousand, calmer situation in the financial markets, decreased profitability per lot (an average of PLN 116) and a decline of trading lots volume to 803 987 lots. One of the relevant factors which determined the level of revenues of XTB in 2018 was the product intervention of the European Securities and Markets Authority (ESMA) coming into force in August, which in case of the retail clients limited maximum permitted level of leverage for CFDs up to 30:1 for major currency pairs and 20:1 for non-majors currency pairs, gold and major indices. Intervention was initially implemented for the period of three months with possibility of further extension. At present, it is known that the intervention will remain in force at least till April, 2019. 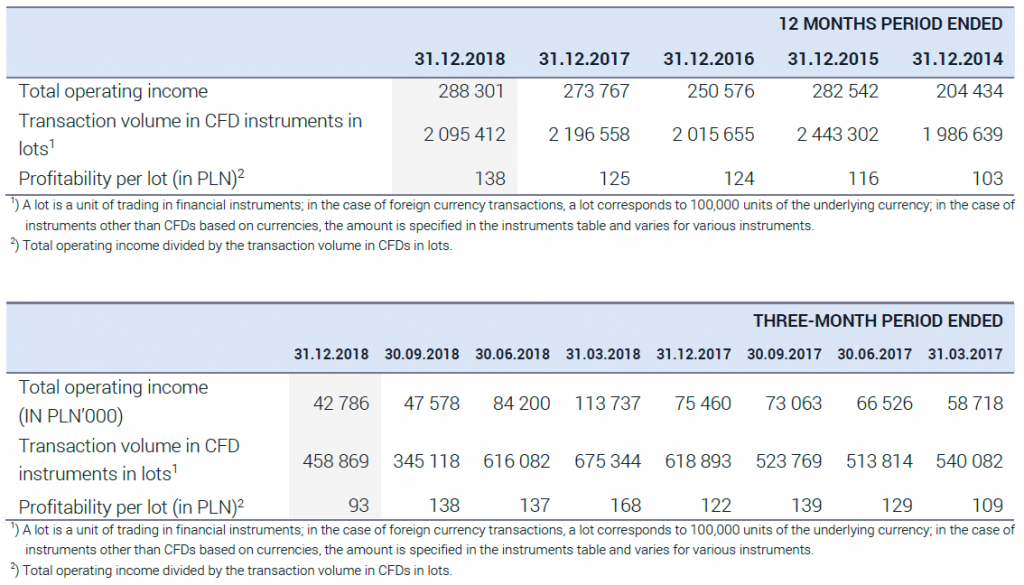 Although in quarterly terms, the revenues of the XTB Group are subject to significant fluctuations, which is a phenomenon typical of the XTB business model, then in a longer time horizon, which is a year, they take on more stable and comparable values to those from historical years.

In 2018, XTB continued implementation of optimized sales and marketing strategy and introduced new products such as shares and ETFs from the largest stock exchanges in Europe and the United States. Expanding XTB’s offer is a reaction to clients changing investment preferences, which include the increasing popularity of shares and ETFs. XTB’s aim is to provide a diversified investment offer simultaneously with comfort of managing the differentiated portfolio on one trading platform. The company analyzes other possibilities of expanding the product offer, which could cause the introduction of new products in 2019.

In 2019 the Management Board will strive to growing customer base. The Management sees the greatest growth potential in the German, French and Latin American market. 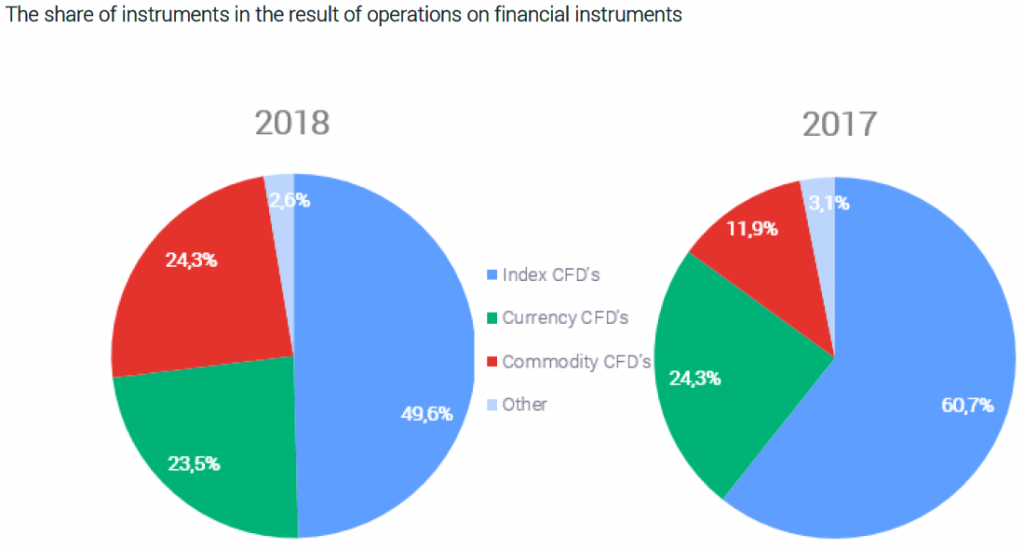 Geographically, XTB revenues were well diversified. In 2018 their growth has occurred in both, Central and Eastern Europe, Western Europe and Latin America. Country from which the Group derives more than 15% of revenues is Poland with shares amounting to 25.2% (2017: 28.6%). The second largest market for XTB is Spain, with shares amounting to 14.7% (2017: 20.7%). The share of other countries in the geographical structure of revenues does not exceed in any case 15%. Latin America is also gaining on importance, which has already replaced the gap in Turkey.

XTB puts strong emphasis on diversification of segment revenues. Therefore, from 2013, it develops institutional activities (X Open Hub), under which it provides liquidity and technology to other financial institutions, including brokerage houses. Revenues from this segment are subject to significant fluctuations from quarter to quarter, analogically to the retail segment, which is typical for the business model adopted by the Group.

elements (bonuses). The average number of employees in the Group was 391 persons in 2018 and 388 persons in
2017. Average monthly cost of remuneration and employee benefits per one employee in the Group in 2018 amounted
PLN 16.7 thousand and increased in comparison to previous year (2017: PLN 15.7 thousand).

• PLN 2 966 thousand of other external services costs as a result of incurring more expenditure on:

– IT systems and licenses (increased by PLN 627 thousand y/y).

In IV Quarter of 2018 operating expenses amounted on similar level as previous quarters of 2018 (after correcting by one-off event).

XTB has a stable market position, growing customer base and over PLN 465 million of own cash on the balance sheet. The Group plans further development by expanding the customer base and product offer, penetrating existing markets and expanding geographically to new markets in Africa and Asia, as well as Latin America, using its presence in Belize as a starting point for expansion and business development in other countries of the region.

The entry into force of product intervention by ESMA creates both opportunities and threats for XTB. On the one hand, there is a temporary drop in trade volumes among European brokers. On the other hand, the Management Board of XTB is convinced of the business’s vitality over a longer time horizon. It seems likely that clients gradually adjust their trading strategies to a lower level of financial leverage. Maintaining the ESMA decision in time should lead to a wave of consolidation in the market and allow XTB to consolidate its strong position on the European market.