XTB financial results for the 1st quarter of 2022

In the first quarter of 2022, XTB reported a record increase in revenues by 135,6% y/y, i.e. by PLN 253,1 million from PLN 186,7 million to PLN 439,8 million. The significant factors determining their level were high volatility in the financial and commodity markets and the constantly growing average number of active clients (increase by 44,7% y/y), combined with their high transactional activity expressed in the number of contracts concluded in lots. Consequently, trading in derivative instruments amounted to PLN 1 560,7 thousand lots (Q1 2021: 1 115,4 thousand lots), and the profitability per lot increased by 68,4%.

XTB has a solid foundation in the form of constantly growing client base and the number of active clients. In the first quarter of 2022, the Group acquired 55 333 new clients compared to 42 760 a quarter earlier, which means an increase of 29,4%. This is the effect of continuing the optimized sales and marketing strategy, bigger penetration of already existing markets, successive introduction of new products to the offer and expansion into new geographic markets. The number of active clients was record high in the analysed period. It increased from 127 174 to 149 726, i.e. by 17,7% q/q.

The priority of the Management Board is to further increase the client base leading to the strengthening of XTB’s market position in the world. These activities will be supported by a number of initiatives, including the new advertising campaign launched on February 14, 2022 with the participation of the new XTB brand ambassador – Joanna Jędrzejczyk – a titled martial arts competitor, the first Polish woman in the UFC organization and a champion in this organization, as well as a three-time world champion in Thai boxing.

XTB, thanks to the cooperation with Joanna Jędrzejczyk, started promoting the offered investment solutions, in particular, convincing that investing in various types of assets is available to everyone, using the tools provided that facilitate entry into the world of investments: through daily market analysis, as well as numerous educational materials. 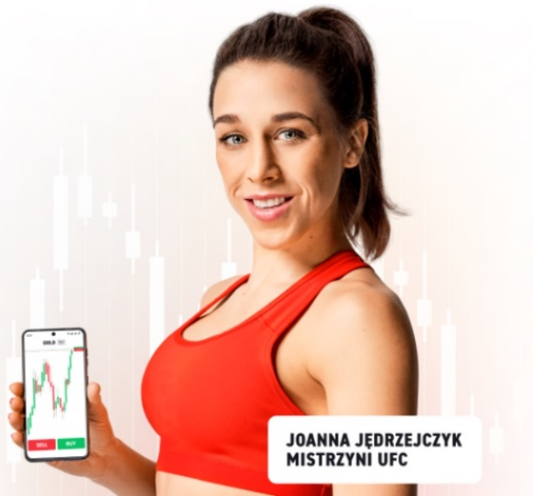 Looking at XTB’s revenues in terms of the classes of instruments responsible for their creation, it can be seen that in the first quarter of 2022, CFDs based on index were in the lead. Their share in the structure of revenues on financial instruments reached 57,4% compared to 39,9% a year earlier. This is a consequence of high profitability on CFD instruments based on the US 100 and US 500 indexes, the German DAX stock index (DE30) or the Russian RUS 50 index. The second most profitable asset class was commodity CFDs. Their share in the structure of revenues in the 1st quarter of 2022 was 30,2% (Q1 2021: 53,8%). The most profitable instruments in this class were CFDs based on quotations of crude oil, gold and natural gas prices. Revenues on CFDs based on currencies accounted for 9,4% of all revenues, compared to 2,7% a year earlier, where the most profitable financial instruments in this class were based on the EURUSD currency pair.

XTB places great importance on the geographical diversification of revenues, consistently implementing the strategy of building a global brand. The country from which the Group derives more than 20% of revenues each time is Poland, with a share of 27,3% (Q1 2021 r.: 37,8%). Due to the overall share in the Group’s revenues, Poland was separated for presentation purposes as the largest market in terms of revenues in the Group. The Group breaks down its revenues by geographic area according to the country of the XTB office in which the client was acquired.

XTB puts also strong emphasis on diversification of segment revenues. Therefore the Group develops institutional activities under X Open Hub brand, under which it provides liquidity and technology to other financial institutions, including brokerage houses. Revenues from this segment are subject to significant fluctuations from period to period, analogically to the retail segment, which is typical for the business model adopted by the Group.

XTB’s business model includes high volatility of revenues depending on the period. Operating results are mainly affected by: (i) volatility on financial and commodity markets; (ii) the number of active clients; (iii) volume of concluded transactions on financial instruments; (iv) general market, geopolitical and economic conditions; (v) competition on the FX/CFD market and (vi) regulatory environment.
As a rule, the Group’s revenues are positively affected by higher activity of financial markets due to the fact that in such periods, a higher level of turnover is realized by the Group’s clients and higher profitability per lot. The periods of clear and long market trends are favourable for the Company and it is at such times that it achieves the highest revenues. Therefore, high activity of financial markets and commodities generally leads to an increased volume of trading on the Group’s trading platforms. On the other hand, the decrease in this activity and the related decrease in the transaction activity of the Group’s clients leads, as a rule, to a decrease in the Group’s operating income. Due to the above, operating income and the Group’s profitability may decrease in periods of low activity of financial and commodity markets. In addition, there may be a more predictable trend in which the market moves within a limited price range. This leads to market trends that can be predicted with a higher probability than in the case of larger directional movements on the markets, which creates favourable conditions for transactions concluded in a narrow range trading. In this case, a greater number of transactions that bring profits to clients is observed, which leads to a decrease in the Group’s result on market making.
The volatility and activity of markets results from a number of external factors, some of which are characteristic for the market, and some may be related to general macroeconomic conditions. It can significantly affect the revenues generated by the Group in the subsequent quarters. This is characteristic of the Group’s business model.
Operating expenses
The operating costs in the first quarter of 2022 amounted to PLN 131,0 million and were PLN 44,1 million higher compared to the comparable period (Q1 2021: PLN 86,9 million). The most important y/y changes occurred in: In q/q terms, operating costs increased by PLN 30,3 million, mainly due to higher marketing costs by PLN 13,4 million, mainly related to higher expenditure on online marketing campaigns, and higher by PLN 10,5 million costs of remuneration and employee benefits resulting mainly from the increase in employment and an increase in provisions created for variable remuneration components (bonuses) and commission costs higher by PLN 3,5 million, resulting from the amounts paid to payment service providers through which clients deposit their funds in transaction accounts.
Due to the dynamic development of XTB, the Management Board estimates that in 2022 the total costs of operating activities may even be about a third higher than that observed in 2021. The priority of the Management Board is to further increase the client base and build a global brand. As a consequence of the implemented activities, marketing expenditure may increase by over 40% compared to the previous year.
The final level of operating costs will depend on the level of variable remuneration components paid to employees, the level of marketing expenditures, the dynamics of geographical expansion into new markets and the impact of potential product interventions and other external factors on the level of revenues generated by the Group.
The value of variable remuneration components will be influenced by the results of the Group. The level of marketing expenditures depends on their impact on the Group’s results and profitability, the rate of foreign expansion and on clients responsiveness to the actions taken. The impact of a new product intervention on the Group’s revenues will determine, if necessary, a revision of the cost assumptions.
Dividend
The XTB dividend policy assumes recommendation by the Management Board to the General Meeting a dividend payment in the amount taking into account the level of net profit presented in the standalone annual financial report of the Company and a variety of factors relating to the Company, including prospects for further operations, future net profits, demand for cash, financial situation, the level of capital adequacy ratios, expansion plans, legal requirements in this area and KNF guidelines. In particular, the Management Board, when submitting proposals for dividend payment, will be guided by the need to ensure an appropriate level of the Company’s capital adequacy ratios and the capital necessary for the development of the Group.
The Management Board maintains that its intention is to recommend to the General Meeting in the future to adopt resolutions on the payment of dividends, taking into account the factors indicated above, in the amount ranging from 50% to 100% of the Company’s standalone net profit for a given financial year. The unit net profit for the first quarter of 2022 amounted to PLN 249,0 million.
The levels of the total capital ratio (IFR) of XTB on individual days in the first quarter of 2022 are presented in the chart below.
At the end of the first quarter of this year the total capital ratio in the Company was 218,0%. The total capital ratio informs about the ratio of own funds to risk-weighted assets, in other words, it shows whether the brokerage house is able to cover the minimum capital requirement for market, credit, operational and other risks with its own funds. Cash and cash equivalents
XTB place part of its cash in financial instruments with a 0% risk weight, i.e. in treasury bonds and bonds guaranteed by the State Treasury. As at March 31, 2022, the total value of own cash and bonds in the XTB Group was PLN 1 271,6 million, of which PLN 937,3 million was cash and PLN 334,3 million for bonds.