XTB financial results for the 3rd quarter of 2018

In the I half of 2018 XTB noted a record revenues (PLN 197,9 million), which were the result the constantly growing customer base, high volatility in the financial markets, relatively high profitability per lot (an average of PLN 153) and significant customer activity expressed in the number of contracts in lots. In August 2018, the product intervention of the European Securities and Markets Authority (ESMA) came into force. which caused, among others reduction for the retail client of the maximum permitted level of leverage for CFDs up to 30:1 for major currency pairs and 20:1 for non-majors currency pairs, gold and major indices. ESMA’s decision together with the holiday period, and the lower volatility on the financial markets, contributed to the reduction in the III quarter of 2018 transactions volume in lots of 34,1% y/y and 44,0% q/q. Volume was lower by 178,7 thousand of lots y/y and unit profitability by PLN 1,7. Consequently, the revenues decreased by 34,9% y/y ie (PLN 25,5 million) from PLN 73,1 million to PLN 47,6 million. It should be emphasized that XTB business model is characterized by high volatility of revenues in a short period of time.

Similarly to the prior quarters of current and previous year, in the III quarter of 2018, XTB implemented an optimized sales and marketing strategy and introduced new products. XTB’s offer has expanded to include shares and ETFs from the largest stock exchanges in Europe and the United States. The aim of expanding the product offer is to create a complete investment company offering various products to investors tailored to their risk appetite.

In the IV quarter of 2018, the Management Board will strive to stabilize the number of new clients and the average number of active clients at the levels observed in previous, record quarters. The Management sees the greatest growth potential in the German, French and Latin American market.

Looking at revenues in terms of the classes of instruments responsible for their creation, it can be seen that, in the III quarter of 2018, CFDs based on commodity dominated. Their share in the structure of revenues on financial instruments in the III quarter of 2018 was 58,9% against 7,5% a year earlier. The most popular instrument among customers was CFD based on quotations of the contract for coffee quoted on the regulated market and an instrument which price is based on quotations of troy ounce of gold on the interbank market. Revenues on CFD instruments based on currency pairs amounted to 22,0% of total revenues against 39,8% a year earlier. Among this class of instruments, the USDTRY currency pair was the most popular among XTB clients. 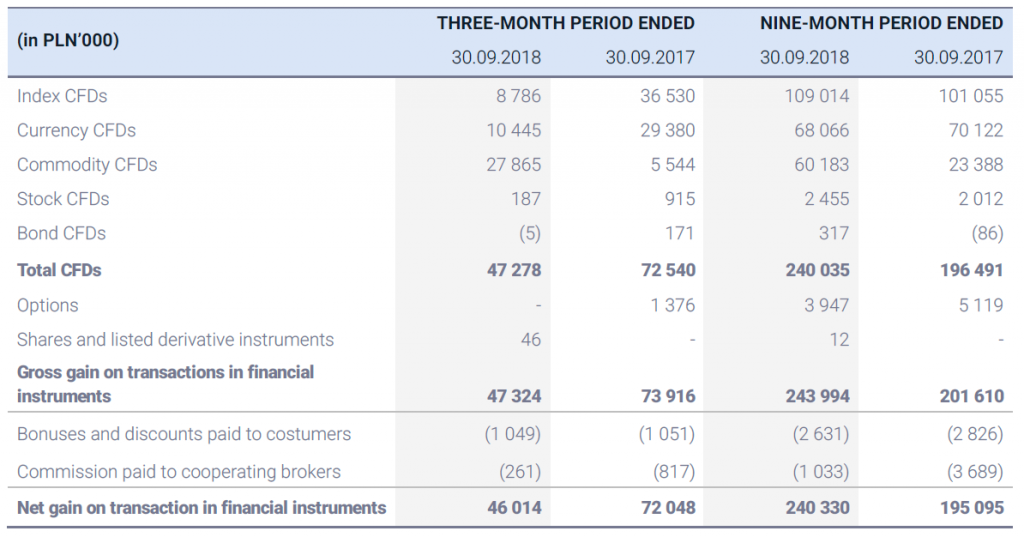 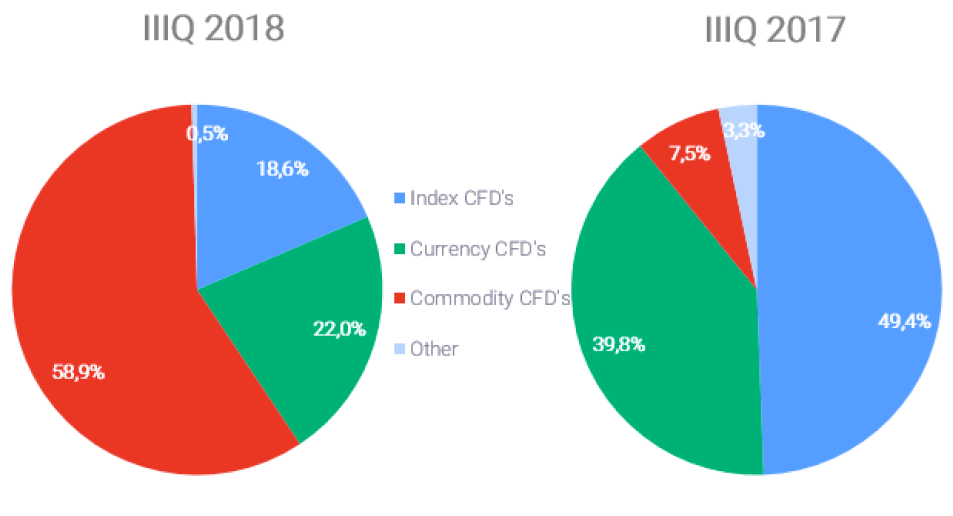 Geographically, XTB revenues were well diversified. In the I-III period of 2018 their growth has occurred in both, Central and Eastern Europe, Western Europe and Latin America. Country from which the Group derives more than 15% of revenues is Poland with shares amounting to 33,5% (I-III period of 2017: 24,5%). The second largest market for XTB is Spain, with shares amounting to 14,5% (I-III period of 2017: 20,3%). The share of other countries in the geographical structure of revenues does not exceed in any case 15%. Latin America is also gaining on importance, which has already replaced the gap in Turkey.

XTB puts strong emphasis on diversification of segment revenues. Therefore, from 2013, it develops institutional activities (X Open Hub), under which it provides liquidity and technology to other financial institutions, including brokerage houses. Revenues from this segment are subject to significant fluctuations from quarter to quarter, analogically to the retail segment, which is typical for the business model adopted by the Group.

Operating expenses in the period of I-III quarter of 2018 amounted to PLN 131,6 million (I-III quarter of 2017: PLN 107,4 million) and were higher by PLN 24,2 million ie. 22,6% y/y. This increase was mainly higher by one-off event, which was administrative fine imposed by PFSA in the amount of PLN 9,9 million and higher by:

• PLN 4,9 million of salaries and employee benefits costs mainly due to the increase in variable remuneration elements (bonuses);

• PLN 1,8 million of commission costs resulting from higher amounts paid to payment service providers through which clients deposit their funds to transaction accounts.

In the Company’s opinion, the imposition of an administrative fine by PFSA is unjustified and not confirmed in the facts. The Commission refused to carry out the evidence requested by the Company (including the expert’s opinion) and did not include the reports of independent experts submitted by the Company. Acting in the interest of the Company and its shareholders, as well as being guided by the welfare of its clients, the Company appealed the decision by filing on 29 October 2018 complaint against the PFSA decision to Provincial Administrative Court.

In terms of q/q, after correcting by one-off event, operating expenses were reduced by PLN 2,1 million ie 4,9%.

The Management Board expects in IV quarter of 2018 operating expenses to be at a level comparable to that observed in the previous quarter of 2018. The final level will depend on the variable remuneration elements paid to employees, the level of marketing expenditures and the impact of ESMA’s product intervention on the level of revenues generated by the Group. The value of variable remuneration components will be influenced by the results of the Group. The level of marketing expenditures will depend on the impact of the results and profitability of the Group and on responsiveness of the customers to the actions taken. The impact of ESMA’s product intervention on the Group’s revenues will determine, if necessary, a revision of the cost assumptions for further months of this year.

XTB has a stable market position, growing customer base and over PLN 500 million of own cash on the balance sheet. The Group plans further development by expanding the customer base and product offer, penetrating existing markets and expanding geographically to new markets in Africa and Asia, as well as Latin America, using its presence in Belize as a starting point for expansion and business development in other countries of the region.

The entry into force of product intervention by ESMA creates both opportunities and threats for XTB. On the one hand, there is a temporary drop in trade volumes among European brokers. On the other hand, the Management Board of XTB is convinced of the business’s vitality over a longer time horizon. It seems likely that clients gradually adjust their trading strategies to a lower level of financial leverage. Maintaining the ESMA decision in time should lead to a wave of consolidation in the market and allow XTB to consolidate its leading position on the European market.