XTB financial results for the 3rd quarter of 2017

Revenue growth in the III quarter by 70.7% y/y from PLN 42.8 million to PLN 73.1 million, is attributable both to the increase in the volume of turnover calculated in lots and to the profitability per lot. Turnover was higher by 55.1 thousand lots and unit profitability by PLN 48.

Similarly to the I half of 2017 the increase in accounts in III quarter was connected with the implementation of an optimized sales and marketing strategy and new products. An additional factor supporting such growth was the favorable situation on the financial markets.

According to the Management Board, in IV quarter of 2017, the growth of accounts should be accelerated q/q due to the intensified marketing activity and introduction of new products into the XTB offer. Moreover, the Management Board maintains that the greatest potential for business growth is in the German, French and Latin American markets.

Looking at the income from the classes of instruments responsible for their emergence, it is clear that, as in earlier periods, the stock CFDs have been leading the way. Their share in the revenue structure in the III quarter of this year reached 49.4% against 61.5% a year earlier. This is a consequence of the high interest of XTB clients in CFD instruments based on the German stock index DAX (DE30) and the US indexes US30 and US500.

The III quarter of this year revenue growth was also attributed to currency CFDs, which increased to 39.7% from 8.5% y/y. This asset class was most popular with the EURUSD currency pair. Clients also actively traded in pairs: AUDUSD, EURGBP, USDJPY, BTCUSD and USDCAD. 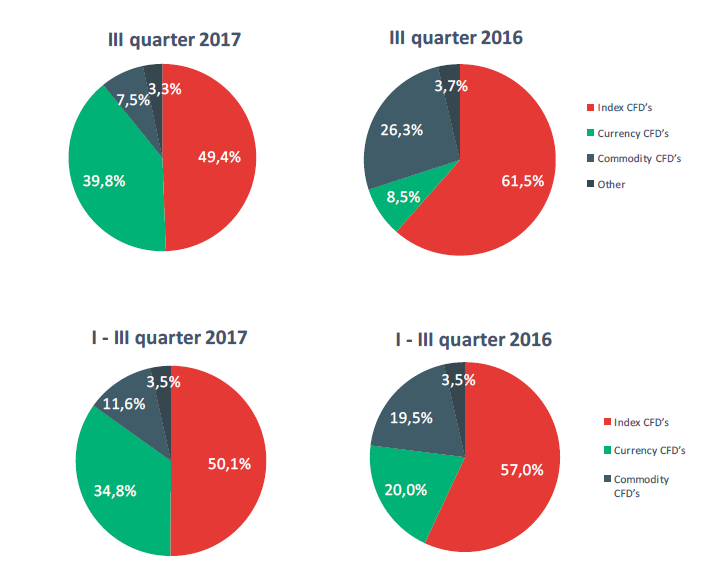 Geographically, XTB revenues were well diversified. Their growth has occurred in both Central and Eastern Europe and Western Europe. Countries from which the Group derives more than 15% of revenues are Poland (24.5% share for 9 months) and Spain (20.3% share for 9 months). The share of other countries in the geographical structure of revenues does not exceed in any case 15%. Latin America is also gaining on importance, which has already replaced the gap in Turkey.

XTB’s segmental revenue diversification is becoming increasingly clear. This is due to the dynamic development of the institutional segment (X Open Hub). From 2013, the Group provides services to institutional clients. Under it, XTB provides liquidity and technology to other financial institutions, including brokerage houses.

In the I quarter of 2017, XTB significantly improved its cost effectiveness compared to the same period of the previous year, while maintaining the increase in new accounts opened and the number of active accounts. In the period, operating expenses amounted to PLN 107.3 million (Q1-Q3 2016: PLN 129.6 million), decreased by 17.2% y/y. This decrease was attributed to the lower by PLN 21.1m y/y in marketing costs, mainly due to the lower spending on advertising campaigns.

In the III quarter of this year operating expenses were comparable to the level of the corresponding period of the previous year and lower than in the two preceding quarters.

The management expects operating expenses to be at a level comparable to that observed in the first three quarters of 2017. The final level will depend on the variable remuneration components paid to employees and the level of marketing expenditure. The value of variable remuneration components will be influenced by the results of the Group. The level of marketing expenditure will depend on the impact of the Group on the results and profitability of the Group and on the responsiveness of the customers to the actions taken.

Management plans for the forthcoming periods assume the development of the Group in particular by expanding the client base, further penetrating existing markets and expanding its  geographical presence in Latin America. With determination he intends to strive to build value for the shareholders.

In the opinion of the Management Board, the Company is significantly underestimated in relation to competitors listed among others on the London Stock Exchange. Emphasis requires that the XTB be internationally recognized, has a welldiversified geographic revenue base based on sound operating fundamentals, and a highly motivated board of directors.
As a result, the Group generates high net profits, as confirmed by the III quarter of 2017.

XTB, as an international entity, listed on the stock exchange has a real chance to consolidate in the industry and become a global player in the FX/CFD market of TOP 5. The XTB Board sees one of the Group’s development directions.
However, it is necessary to have a satisfactory valuation of the Company itself on the WSE, without which the implementation of the strategy in this area is severely hampered.